Comment: As the United Nations Children’s Fund (UNICEF) releases a twenty year study into the practice of female genital mutilation and finds that 30 million girls are at risk of having their external genitalia forcibly removed in the next decade, isn’t it about time we cast off the shackles of cultural relativism?

The UNICEF report, Female Genital Mutilation/Cutting: a statistical overview and exploration of the dynamics of change, is the most comprehensive review ever undertaken into the tradition of female genital mutilation and cutting (FGM/C) and reveals that over 125 million women and girls alive today have already been subjected to the brutality and trauma of the practice.

While the report ultimately highlights a slow decline in the number of girls being subjected to this anguish, and reveals that girls and women consistently underestimate the number of boys and men who wish to see an end to FGM/C (in several countries, men now are more opposed to FGM/C than women) it also shows that even among those who wish to end the practice, social pressures exerted upon them are sufficient to ensure the bloodying of blankets continues with scant enquiry.

As defined by the World Health Organisation, female genital mutilation refers to ‘all procedures involving partial or full removal of the female external genitalia or other injury to the female genital organs for non-medical reasons’. In it’s most extreme form, FGM/C involves the sowing up of the vagina completely. The removal of the external  genitalia may be undertaken with sharp rocks, pieces of glass, scissors or blunted knives and razors. FGM/C is generally carried out without anaesthetic. 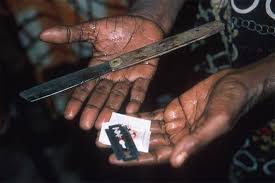 The latest report by UNICEF does show that increasing numbers of women are now being treated by medical personnel but it is still all too common for FGM/C to be carried out by traditional cutters using unsterilised instruments.

The negative effects on the young girl are both immediate and far reaching, from the immediacy of the pain, heavy bleeding, incomplete healing, infections, and urinary tract problems to psychological problems, sterility, complications during childbirth, damage to surrounding organs, dermoid cysts and death.

Despite the barbaric nature of the procedure and the myriad health problems associated with it, the practice still enjoys considerable support (this has been shown to drop dramatically amongst educated women and women who are working) with most women citing social acceptance as the most commonly reported benefit alongside FGM/C benefitting marriage prospects and being required by their religion.

The argument that FGM/C is somehow required by religion is a spurious one given that the practice predates either Christianity or Islam, that neither scriptural text makes any reference to the practice and the issuing in 2007 of a fatwa by the Al-Azhar Supreme Council of Islamic Research, stating that not only did FGM/C have no place in Sharia or any of it’s partial provisions, but that it was a sin that was to be avoided at all costs.

FGM/C has long been recognised as a violation of basic human rights. Since 1993, FGM/C has been classified as an act of Violence Against Women while simultaneously, acts of violence against women were for the first time acknowledged to fall under the purview of International Human Rights Law.

So what can be done when international human rights standards come into direct conflict with long standing cultural traditions?

The question strikes at the heart of two concepts; the universality of human rights and cultural relativism.

Cultural relativism is the assertion that human rights and values are not universal and vary greatly according to cultural perspectives, therefore an individuals beliefs and proclivities ought to be understood by others within the context of that individual’s own culture.

I have a number of problems with this assertion and the basis for it’s objection to the universality of human rights. It attempts to persuade that international human rights are no more than legislative pronouncements by more powerful nations, arbitrarily declared in order to force their ideals on weaker nations as part of an imperialist, moral colonisation.

I am an advocate of cultural rights and I am fully appreciative of the importance of culture in asserting self-determination and in it’s communicative power but cultural rights are not without limitation. Cultural rights extend only to the point at which they begin to infringe upon the rights of other individuals. No cultural right ought ever to be invoked as justification for the disempowerment of another or to excuse the denial of another’s individual freedoms.

Increasingly however, cultural relativism serves only as a means toward legitimising illegitimate actions by a ruling power elite.

FGM/C violates the most basic human right to health and bodily integrity under Article 25 of the Universal Declaration of Human Rights. It also directly contravenes the UN Convention on the Elimination of all Forms of Discrimination Against Women, falls under the rubric of the Convention Against Torture and Other Cruel, Inhuman or Degrading Treatment or Punishment and violates the Convention on the Rights of the Child given that the practice is prejudicial to the health of the child and that the majority of FGM/C procedures are carried out when the girl is between the ages of 5 and 10.

It is here that the argument for cultural relativism fails. Cutting the clitoris from a six year old girl with a broken piece of glass while she is held down by four fully developed adults; removing her labia without her consent or without her having any concept of what is happening to her is not cultural expression, it is the butchering of femininity.  It is a product of a misogynistic savagery that has no place in any civilised society. I state that with full knowledge that human beliefs and values differ greatly across the globe and stand by it still, for any society that engages in the systemic torture of half of her people on the basis of gender ought never to be thought of as displaying any degree of civility, regardless of what culture they claim to promote.